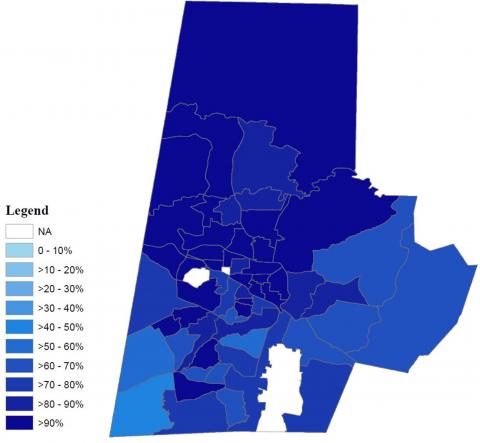 DUPRI’s Allison Stolte and Giovanna Merli, in collaboration with Ben Goldstein and other Duke School of Medicine colleagues, have published new research in Social Science & Medicine demonstrating the efficacy of using electronic health records (EHRs) to assess children's population health. Using EHRs from the Duke University Health System and data from the American Community Survey, the authors find that the demographic characteristics of pediatric patients captured by the EHRs are similar to those of Durham County's child population. Although the county rate of children captured in the EHRs is high, there is variation across census tracts. On average, census tracts with higher concentrations of non-Hispanic Black residents have lower capture rates and tracts with higher concentrations of poverty have higher capture rates, with the poorest tracts showing the largest racial gap in rates of children captured by EHRs. The findings suggest that EHRs from a large health system can be used to assess children's population health, but that EHR-based evaluations of children's health disparities and health care patterns should account for differences in who is captured by the EHRs based on census tract characteristics.

The figure shows the percentage of Durham County residents under the age of 18 captured in the DUHS EHRs with any encounter in 2016–2017, by census tract. In most tracts, EHRs capture more than 80% of the child population.

This work benefited from pilot funding provided by grant 5P2CHD065563 to the Duke Population Research Center from the Eunice Kennedy Shriver National Institute of Child Health and Human Development (NICHD).