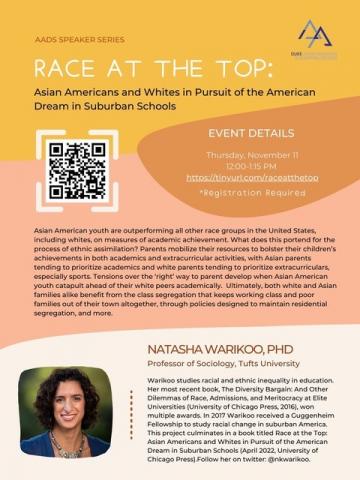 Asian American youth are outperforming all other race groups in the United States, including whites, on measures of academic achievement. What does this portend for the process of ethnic assimilation? In this talk I present findings from a study of a well-off suburban community with a large and growing Asian American population. Parents mobilize their resources to bolster their children's achievements in both academics and extracurricular activities, with Asian parents tending to prioritize academics and white parents tending to prioritize extracurriculars, especially sports. I show how tensions over the 'right' way to parent develop when Asian American youth catapult ahead of their white peers academically. That is, rather than whites and Asians assimilating, either by Asians adopting dominant 'white' parenting practices or whites adopting the strategies of Asians, parents engaged in moral boundary making to defend their parenting, despite well-known stereotypes about Asian parents being too demanding and white children being outsmarted by their Asian American peers. Ultimately, both white and Asian families alike benefit from the class segregation that keeps working class and poor families out of their town altogether, through policies designed to maintain residential segregation, and more.

Natasha Warikoo is Professor of Sociology at Tufts University. Warikoo studies racial and ethnic inequality in education. This project culminates in a book titled Race at the Top: Asian Americans and Whites in Pursuit of the American Dream in Suburban Schools (April 2022, University of Chicago Press). Warikoo earned her BSc/BA in mathematics and philosophy at Brown University, and her PhD in sociology at Harvard University. Follow her on twitter: @nkwarikoo