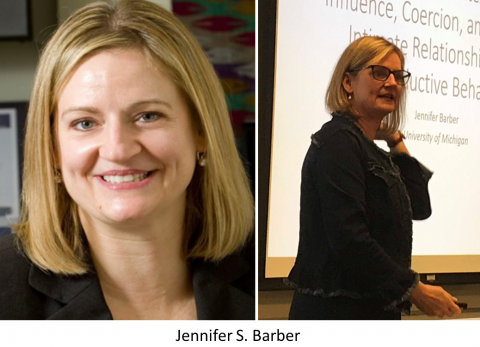 Dr. Barber will present the results from four separate papers to illustrate the importance of intimate relationships as the immediate context of whether young women get what they want in terms of their reproductive behaviors.

The analyses are based on the Relationship Dynamics and Social Life (RDSL) study, conducted by Dr. Barber, Yasamin Kusunoki, and Heather Gatny.  RDSL surveyed 1,003 18- and 19-year-old women in a Michigan county, and followed them with weekly 5-minute online survey interviews for 2.5 years (130 weeks). They reported 2,704 unique partners, and the weekly interviews assessed the qualities of those relationships, sexual intercourse with those partners, their joint contraceptive use, and experiences with pregnancy. In addition, the RDSL team conducted semi-structured interviews with a subset of women who became pregnant during the study (N = 45), and a propensity-score-matched sample who avoided pregnancy (n = 32). The four papers compare a woman's desires and expectations across different times within a relationship using fixed-effects models.

Dr. Barber's talk illustrates those comparisons with the semi-structured interview data. Couples disagree most about whether they want a baby when they are engaged/married, but also during times of conflict -- when there is non-monogamy and perhaps physical violence. Women also expect the lowest control over contraception during those times, as well as during the most casual (not agreed to be monogamous, not spending a lot of time together) periods. And, finally, when they are engaged/married, women have the strongest desires for sex and expectations of control over whether to have sex, but they are least willing to refuse unwanted sex, and thus it is in that context which sexual intercourse is most likely to be undesired. Conversely, in the most casual periods of their relationships (no agreement of monogamy, spending little time together) women have low desire for sex, expect to have control over whether they have sex, and are highly willing to refuse sex -- as a result, they have very little undesired sex in that context. Together, these papers paint a picture of engaged/married relationships during these young ages -- where nearly half of the pregnancies during the study period occurred -- as more coercive and controlling than less serious relationships during these ages.